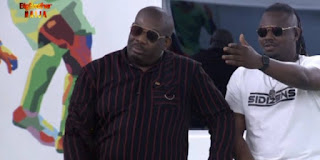 The Indomie Cooking Challenge hosted by Don Jazzy and Dr Sid saw not just one Housemate winning but the entire Pepper Dem Gang winning the sum of five million Naira.

Ike, Frodd and Khafi who were the top three in the Puzzle Challenge also walked away with a year’s supply of Indomie and the opportunity to send a customized ingredient basket to their family.
The first challenge was a Jigsaw puzzle of Indomie packs. Puzzle boards were set up in the Arena and Housemates had to use the pieces beside each board to complete their puzzle. Ike, Khafi and Frodd were the first three to finish while Omashola and Mercy came in last.
How They Ranked In The Puzzle Challenge
Ike
Khafi
Frodd
Venita
Seyi
Elozonam
Mike
Cindy
Diane

In the wake of Jussie Smollett‘s arrest, his character “Jamal” has now been dropped from the last two episodes of the current season of TV show Empire. A statement jointly released Friday by the executive producers of the show, Lee Daniels, Danny Strong, Brett Mahoney, Brian Gazer, Sanaa Hamri, Francie Calfo and Dennis Hammerconfirmed the decision to remove the role. The […]

On one of the eventful ofuting of The People helping people groups of Young f the outing of the Askarians with the Boys scout team yesterday 22nd of June 2019,at the millennium park Fct Abuja. It was a great one as the both families had a nice outing together coupled with series of games,sports and […]

Everyone yesterday was put at the edge of their seats when news rocked the internet about Adekunle Gold and Simi’s secret wedding in Lagos. Same thing is about to happen again today as reports from close sources confirmed to us that Simi is already carrying Adekunle Gold’s baby. Reports reaching us have confirmed that the […]