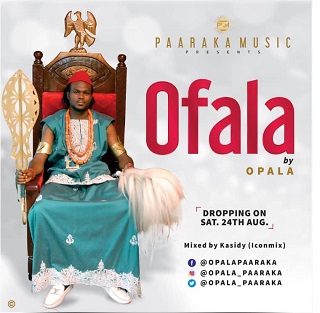 The rich ofala festival of His Royal Highness, Obi Nnaemeka Alfred Ugochukwu Achebe of Onitsha Kingdom is here again. The feeling is in the air and the world at large cannot wait to tour the great city of Onitsha to capture the most prominent festival in the whole of southeast Nigeria. Before the ofala festival there is the ofala carnival which comes a day before the main ofala itself.
During the ofala carnival the Onitsha youths parade around the city of Onitsha displaying all the cultural and societal attires of Onitsha and the world. The six pointed star Opala, who is already making an impact in the music industry after he dropped the banger “Jenjeleke” a few months ago and this time he has given us an ofala song that will carry our frenzy for Onitsha ofala festival into another realm of ecstasy.
The style of the song can be said to be highlife and the titles of the king and his five top ranked cabinet chiefs are all recognized in the song. The musical video of this song is in prospect and Opala is also preparing an ofala album which is set to be released before the ofala festival of 2019. This song and the album itself will be timeless as long as the Onitsha ofala festival and the ofala carnival remain in existence, this ofala song and the ofala album will be immortalized.
“Ofala was produced by Kasidy (iconmix).
Enjoy this groovy song, share and Comment.
DOWNLOAD MP3

Dremo – Hustlers Anthem ft. Mayorkun. Sparking new single from DMW’s Dremo who drops his version of Mayorkun’s “Hustlers Anthem”. The challenge has been getting a number of interactions from several artistes who have also dropped their own version of the tune. Get the brand new audio below and enjoy.  DOWNLOAD MP3

But reacting to the development, Nigerians on Twitter expressed mixed feelings as they shared their thoughts. Nigerians have reacted to the directive by President Muhammadu Buhari for citizens affected by xenophobic attacks in South Africa to be evacuated back to the country. Last week, Air Peace, a private airline company, had offered Nigerians willing to […]